Growing up in a strictly religious home, I understood there existed a Supreme Being who oversees all activities in this world. I was told to call Him “Allah” even though He had many different names. I was told He is the Creator of the heavens and earth and all the things in them. I was told He created me and all other humans and that He will kill me when He wishes.

I started schooling and met other students from other religions. I am a Muslim so meeting people from different religions was refreshing. Most of my colleagues in school were Christians. I asked about their perspective of God and they didn’t give me anything different from what I knew. Although we were from different religions, it was clear that we were all worshipping our “God” simply because we feared him.

I didn’t understand why I should worship a God only because I feared Him. I started learning about God and I was marveled at what I found. I found a God of Love. I found a God who provides for His creations despite the fact they disobey Him. A God who created man and asked him to subdue the world. A God who created man and honored him with the opportunity to name all His creations. A God who I could find solace in. A God who grants me life everyday. A God who doesn’t bill me for air, water, sunshine, moonlight or anything He created. A God who tells me to never doubt His mercies. A God who tells me to live in unity with everyone even if they weren’t my relatives or religious affiliates. A God who promises me an infinite amount of joy in the hereafter subject to my obedience to Him. What a God He is!

Yes, I fear this God because His wrath is huge but I love Him more because His mercy and compassion supercedes His anger.

On this day, I entreat you to Love God because He loves you more. No matter your level of sin, just repent sincerely and agree never to go back to your bad ways and God’s abundant mercies will rain on you. 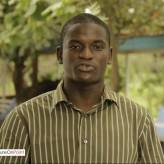 My name is Abdul-Lahie Abdul-Rahim Naa but I prefer to be called Naa Ninche I am young boy (my age is embarrassing though) but very passionate about finding solutions to the many menace staring us in the face The first way I express myself is to write hence my decision to go into blogging. I am a simple youthful person who believes we have what it takes to achieve what ever we wish. I also blog at naaninche.wordpress.com/

THE “GOLD” MOTHER LEFT FOR US